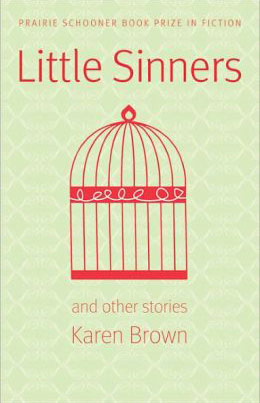 One of Publishers Weekly Best Books of 2012

“Brown has a talent for evocative detail, but her ability to explore the perversities of memory and desire in haunting prose is her greatest strength.”
—Publishers Weekly starred review

“Brown’s detailed style, meticulous in describing character and place, creates realistic slices of life. . . . Her stories will appeal to short-fiction readers for their strength of style and depth of emotional resonance.”
—Ellen Loughran, Booklist

“Karen Brown pulls off a Steinbeck-ian trifecta (powerful realism, literary depth, and unpretentious storytelling) with Little Sinners. This is a powerful and rare achievement that defines only topnotch authors.”
—Michael Adelberg, New York Journal of Books

“In a era where female writers and characters are still sometimes marginalized, Karen Brown and a collection like Little Sinners and Other Stories ought to championed, not because of who wrote it, but because its mastery of the art form.”
—Word/Sound

“One of the greatest strengths of Little Sinners, and Other Stories is the way Brown ends each piece. She has a knack for the backhanded reveal and settling into just the right emotional pitch, something between despair and anxious resignation, a feeling that aptly fits her characters and settings. Her endings are complicated moments, revelations of the tension between wanting to give in or wanting to give up in the face of one’s interior darkness.”
—Michelle Bailat-Jones, Necessary Fiction

“Brown’s emotional stories cut to the quick. They wound; they scar. The stories in Little Sinners are intelligent, dark, deep, and murky, much like a woman’s soul. Brown has a keen sense of what works. . . . I dare you to read Little Sinnersand come away empty.”
—Jamie Boler, Bookmagnet’s Blog

“In a way, Little Sinners is a book of ghost stories — although often the ghosts its characters encounter are themselves.”
—Colette Bancroft, Tampa Bay Times

“The work of Karen Brown might be described as suburban noir, because it takes the expected situations, the same old rituals of everyday life and shows us the seedy underbelly, the darker moments, the ways we fail and fall down.”
—Richard Thomas The Nervous Breakdown