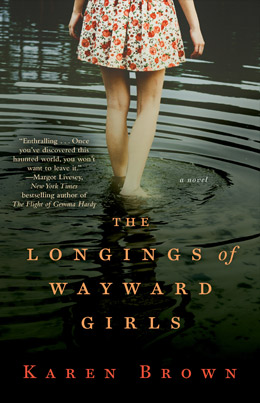 The Longings of Wayward Girls

The dark side of a seemingly perfect Connecticut suburb comes to light when one woman’s long-buried secrets refuse to stay in the past, in this engrossing debut novel of psychological suspense.

It’s an idyllic New England summer, and Sadie is a precocious only child on the edge of adolescence. It seems like July and August will pass lazily by, just as they have every year before. But one day, Sadie and her best friend play a seemingly harmless prank on a neighborhood girl. Soon after, that same little girl disappears from a backyard barbecue—and she is never seen again.

Twenty years pass, and Sadie is still living in the same, quiet suburb. She’s married to a good man, has two beautiful children, and seems to have put her past behind her. But when a boy from her old neighborhood returns to town, the nightmares of that summer begin to resurface, and its unsolved mysteries finally become clear…

“Brown explores the hazy edges of memory, the gnawing desire to escape circumstance, and the pervasiveness of one neighborhood’s secrets. The result is a nerve-racking, psychologically complex novel sure to haunt readers—especially those with dark secrets of their own.” (Booklist, starred review)

“A psychological suspense that grabs readers from the start…complex and haunting.” (Kirkus)

“Brown creates a story full of tension and suspense with an ending that is unexpected.” (Publishers Weekly)

“Both the sex and the suspense benefit from how well Brown grounds them in sharply observed reality. The neighborhood, past and present, comes vividly to life with its shifting alliances among girls and grown women, relationships that range from deeply supportive to devastatingly cruel. She also does a fine job of delineating the points of view of the two Sadies, the compulsively nosy 12-year-old and the secretive 36-year-old.

For both of them, the bonds between mothers and daughters are a profound puzzle. Its solution may never be perfect, but in The Longings of Wayward Girls Brown puts the pieces together to moving effect.” (Colette Bancroft, Tampa Bay Times)

“The Longings of Wayward Girls is an enthralling account of how a daughter follows in her mother’s footsteps…but not too closely.  Brown tells a wonderfully suspenseful and eerie story as she goes back and forth between Sadie’s childhood and her adult life, and the result is a novel full of mysteries, surprises, and the best kinds of psychological revelations.  Once you’ve discovered this haunted world, you won’t want to leave it.”
—Margot Livesey, New York Times bestselling author of The Flight of Gemma Hardy

“Haunting, sexy, and evocative, THE LONGINGS OF WAYWARD GIRLS features motherhood and daughterhood, marriage and adultery, and the simultaneous coziness and creepiness of New England suburban life, all wrapped up in a page-turning tale of suspense. A gripping debut novel.”
—Cathi Hanauer, New York Times bestselling author of Gone

“The Longings of Wayward Girls is haunting and delicate and beautiful, with the spark and charge of a psychological thriller.  Karen Brown writes like an angel, but the shadows of past ghosts linger on every page. I could not put this compelling novel down.”
—Jennifer Gilmore, author of Something Red, a New York Times Notable Book of 2010

“The Longings of Wayward Girls caught me by the throat from the first page.  The dangling mystery and tale of girlhood friendships reeled me in, and I loved Brown’s ability to move the reader fluidly back and forth through time.  By the book’s end, as the final truths are exhumed, I felt like I’d grown up with these characters.  Brown has deftly crafted a first novel that will touch a chord inside anyone who has harbored a haunting secret, or been buffeted by the conflicting crosswinds of coming of age.”
—Lee Woodruff, New York Times bestselling author of Those We Love Most

“Nothing is as it seems in this psychologically complex story of girls gone missing and mothers who stray. Karen Brown deftly alternates between two generations of parallel drama in a neighborhood of facades and gentle menace. I stayed awake far too late with the rich tension of wondering whether she’d bring her characters in for a safe landing.”
—Nichole Bernier, author of The Unfinished Work of Elizabeth D

“A heart-stopping novel of suspense that’s as intelligent as it is compelling, as beautiful as it is disturbing.  Brown’s skill, empathy and sensitivity make this debut stand apart, and stand out. The astute observations, evocative atmosphere and bone-chilling scenes make for a moving, provocative read. A star is born.”
—M.J. Rose, internationally bestselling author

“In the time between playing with Barbies and puffing on stolen cigarettes, girls’ games can turn dangerous—and sometimes fall far over the line. In The Longings of Wayward Girls, the past returns to plague the present with a vengeance that can cost a woman her husband and children. Brown’s haunting prose sets the mood for the heartbreaking choices made by mothers and daughters.”
—Randy Susan Meyers, international bestselling author of The Murderer’s Daughters and The Comfort of Lies

“Through pitch-perfect details and an eloquent voice, Karen Brown delivers a suspenseful and memorable debut. Moving effortlessly between the late 1970s and the present-day, Brown explores what harm may come should we choose to follow the path laid down by those who came before us.”
—Lori Roy, author of Bent Road

“Lost and missing children haunt the pages of The Longings of Wayward Girls, a story rich with astute and poignant detail. This is compelling, read-all-day drama.”
—Maryanne O’Hara, author of Cascade

“An absorbing novel about the misgivings and shortcomings of domestic life, about the confusing intersection of glamour, lust, and self-destruction, and about a woman haunted by a long-ago act of girlhood cruelty.”
—Susanna Daniel, author of Stiltsville and Sea Creatures

“Brown intricately weaves together past and present, demonstrating how casual acts of childhood cruelty can linger well into a seemingly stable adult life. But Brown is also a uniquely talented writer, capable of teasing out poignant commonalities between her protagonist’s teen and middle-aged selves. A beautifully written, unbearably tense debut novel.”
—Holly Goddard Jones, author of The Next Time You See Me